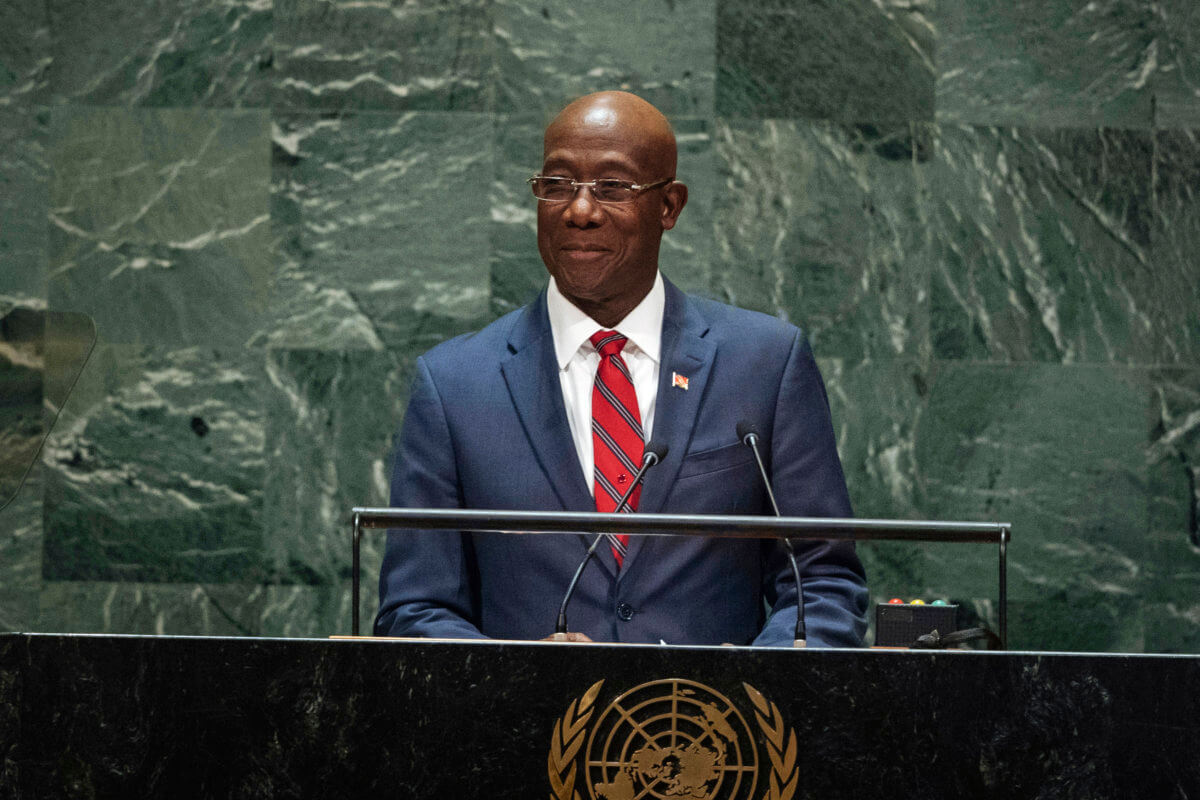 Panamanian carrier Copa Airlines touched down at the Grantley Adams International Airport on Wednesday, after a two-year hiatus, with an almost 80 percent load factor.
Barbados Tourism Marketing Inc.’s (BTMI), Director of Latin America and the Caribbean, Corey Garrett, who arrive on the flight, said the return of the airline came after “some very deep intense discussions” with Copa representatives.
He spoke about the significance and benefits of the airline returning to Barbados.
“Latin America is one of our closest continental neighbours and at the same time provides a perfect opportunity to continue  to grow  the portfolio of tourism marketing for destination Barbados, in that particular market. We understand what the focus is; we understand the market, and we understand the airline that we are working with.”
He also noted that with the return of Copa Airlines, people in Latin America, North, Central and South America would have access to Barbados, and as such, the country could persue not only leisure tourism, but also ” high net worth individuals,” investors, and those who wish to hold meetings, incentives, conferences, and events.
Garrett also shared that the BTMI would continue to promote and position Barbados, “the gem of the Caribbean Sea, as the number one viable in the Caribbean.”
The flight, which consisted of nine crew members including 131 passengers and 15 media personnel who were from Latin America.
Copa Airlines, a subsidiary of Copa Holdings, first started flying to the island on July 17, 2018. The carrier will facilitate two direct  flights weekly from Panama on Wednesdays and  Saturdays.
CARIBBEAN
The Caribbean Hotel and Tourism Association (CHTA) says tourism officials throughout the  region have an optimistic outlook for what the future holds with the (CHTA) noting that the region’s tourism renaissance is well underway, with some destinations approaching or exceeding recording visitor arrival numbers. Tourism officials claimed that  travel demand, elimination or significant reduction in travel restrictions, the return of airlift, attractive deals and package being offered by hotels, and a range of destination and hotel choices and upgrades that are now in places as key factors for the rebound.
CHTA President Nichola Madden-Greig applauded the region’s tourism, health and government leaders for their work over the past two years to position the region’s largest industry, tourism, to recover from the pandemic.
She pointed to the announcement last month by the World Travel and Tourism Council at its  global summit in Manila, recognizing the Caribbean and Latin America as leading the global tourism recovery.
“During the pandemic, many hotels and attractions used the time to improve on their product and service offerings, also recognizing the changing needs of the discerning traveler.
We continue to offer accommodations experiences which appeal to the full range of traveler interests.
Madden-Greig noted that, on average, hotels and resorts in the Caribbean will approach close to 80 percent of their record pre-pandemic performance this year, with some destinations setting all-time records.
Cruise ships are returning, which are especially important to attractions, transportation providers such as independent taxis, and small-and medium-sized vendors. In addition, investment in new and upgraded hotels and resorts have not slowed.
JAMAICA
The Jamaica government says a Constitutional Reform Committee (CRC), will include representatives from the government, the parliamentary opposition, relevant experts, and the wider society, is to be appointed to ensure the country’s smooth transition to a republic
Legal and Constitutional Affairs Minister Marlene Malahoo Forte told the House of Representatives that she has set out the work to be done by the committee in very broad terms, specifying, among other things, that it will involve at this stage the conduct of a thorough and comprehensive review of the 1962 constitution.
“This includes the 2011 Charter of Fundamental Rights and Freedoms, as well as recommendations for reform made through the various constitutional reform commissions and committee in the past, ultimately, to implement an ambitious reform agenda, settled  by consensus,” said Malahoo Forte said.
She told the legislators on Tuesday that she has written to Leader of the Opposition Mark Golding requesting that he name two members  of the parliamentary opposition to the committee, which is now being constituted.
She said Golding is of the view that the relevant parameters for Jamaica to become a republic have already been agreed on by the two major political parties, arising from the extensive constitutional reform  consultative processes over the past 25 years and the requisite legislation research that has already been done.

The Carnival Development Corporation (CDC) is promising an energetic Vincy Mas 2022 as the festival returns  following a two- year hiatus caused by the COVID-19 pandemic.
The CDC’s co-ordinator of shows, Anthony Dennie, told a press conference that while the festival is open to patrons regardless of their COVID-19 vaccination status, the CDC is “pretty much still sensitive to the fact that the Covid-19 is still here.”
He also boasted that Vincy Carnival is now ahead of other carnivals across the region including Trinidad and Tobago’s two-day festival.
The festival kicks off pm Friday June 24, with calypso semi-finals, dubbed,”Ting Nice Agen.” At that show, 22 calypsonians will be vying for ten spots in the finals. Wetty Beatz, a Vincentian artiste based in France, will headline the calypso semi-finals, which will also feature a guest appearance by Calypso Monarch Shaunelle Mackenzie amd Trinidadian calypsonian, Edwin “Crazy” Ayoung.
The festival continues on June 25, with Junior Carnival, which, Dennie said, will be different this year.
On June 26, Royal Rumble, the semi-finals for Regga and Sixa Monarch competition, will be held following a jump- up in the city. At that show, 20 artistes will compete in each category for 10 spots in the finals.
The CDC’S  signature event, Evo, is slated for July 1. It will feature headline artists such as Problem Child, Skinny Fabulous, Jamesy P, and Fireman Hooper.
Vincy Mas 2022 continues on July 2, with what has traditionally been the largest show, the finals of Soca and Ragga Soca competition.
“On Sunday, July 3, Pankaimas will feature the calypso competition, nine steel bands as well as carnival costumes,” he said
ST. VINCENT
A 47-old Vincentian man was sentenced by high court judge for  more than 22 years in jail for raping a 9 year old HIV positive girl in March 2018. Justice Brian Cottle imposed the 22 years and ten month’s jail term on Cassel Lavia after a jury, on May 6, returned unanimous guilty verdict on one count of unlawful sexual intercourse and two counts of indecent assault of the child.
The judge sentences Lavia  to two years and four months on each count of the indecent assault charges, but ordered that they run concurrent to longer sentence.
The High Court  heard that on March 7, 2018, the child was on her way to the bathroom at her home, when Lavia grabbed her from behind while wearing only his boxer short and pressed the lower part  of his body against her and started to gyrate.
Lavia stopped when another child knocked at the door. But the following day, the girl’s mother, who trusted the convicted man, went to seek medical attention and Lavia went into the child’s bedroom when she was taking off  her uniform.
He started to have sexual intercourse with the child and only stopped when another child came into room.
Later that same night, the court heard, Lavia kissed the girl on her lips and sucked her breast and continues to sexually molest her. The next morning, Lavia told the girl not to report the matter to her mother.
SURINAME
Suriname has welcomed the recently announcement by the French company, TotalEnergies, that is has discovered a significant amount of oil and gas in the Krabdahu-1 well in Block 58, offshore Suriname.
“With the final investment decisions on the horizon, the government is very positive about the most  recent discovery, which will certainly have a positive impact on the investment decision that is on the agenda for the second half of the year 2022,” the administration on Paramaribo said in an official statement.
TotalEnergies and the American Apache Corporation (APA Corporation) announced that day it had discovered a significant amount of oil and gas in the Krabdahu-1 well and the government said that the final investment decisions will be promising for the further organizations and development of the Surinamese oil and gas sector.
After this well, TotalEnergies will continue exploration drilling while Apache will also start an exploration well in Block 53 in March this year. Shell will also start drilling in Block 42 in the second quarter of this year.
TRINIDAD

Thousands of Trinidadian and Tobagonian workers who gathered at Charlie King Junction in the deep South (Fyzabad) for Labour Day celebrations on Sunday “voted” that they no longer had confidence in the leadership of Dr. Keith Rowley as prime minister and his government.

Declaring Charlie King Junction the “the workers parliament,” the Oilfields Worker’s Trade  Union (OWTU) President, Ancel Roget “moved the no confidence motion for a number reasons, including the significantly declining standard of living of citizens, increased fuel prices and taxes, government’s complete disregard for the pain and suffering of ordinary working people by overseeing and consenting to the retrenchment and thousands of workers and plans to send home thousands of others.”
He said while ” deceitfully” claiming to restructure, the government was moving swiftly to privatize state enterprises.
Roger noted that for the last seven years, government “has not brought no manner of legislation to the Parliament to protect workers.”
He stressed that the government had not increased  workers” salaries for the past nine years which was causing “great hardship and suffering.”
And he said many workers were finding it impossible to put food on the table, pay rent, send their children to school and are struggling merely to survive.
The workers from the scores of trade unions responded with a responding “yes” when Roget asked them whether they were in favor of his “motion.”
Having passed the motion of no confidence in Rowley, Roget said the next move was to deliver the motion document to the Office of the Senate, Speaker of the House of Representatives and CARICOM.
— Compiled by Azad Ali