Guyana’s prez calls for peace at the 72nd United Nations 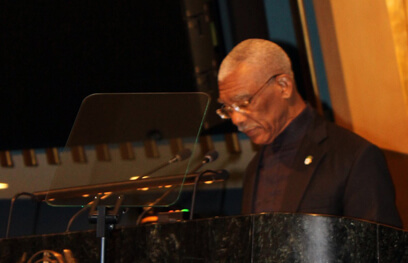 In his address to the 72nd United Nations General Assembly, David A. Granger, president of the Cooperative Republic of Guyana, called for peace in the world.

The head of state told the General Assembly on Sept. 20, 2017, that ‘striving for peace’ has been the principal purpose and preoccupation of this organization throughout its existence. “A good life for the world’s peoples and the sustainable use of the planet’s recourses are predicated on peace with justice, including justice within and between nations,” he stated, adding, “The world is weary of war.”

Granger said that ‘striving for peace’ must be humanity’s ceaseless quest. He noted that the United Nations is the paramount global instrument of peace. It has a vital role to play in ensuring respect for international law through the International Court of Justice and the Security Council.’

He added, ‘striving for peace’ must aim at resolving long-standing inter-state conflicts. Guyana, in this regard, supports the call for the reform of the Security Council to give even greater voice to developing countries.

‘Striving for peace’ and the right to development have been Guyana’s deepest concern since Independence in 1966.

I addressed this Honourable Assembly last September, explaining the danger we have been facing on our borders as a consequence of the territorial claims of our western neighbour — the Bolivarian Republic of Venezuela. I laid before the world’s nations the peril Guyana was enduring on its borders at the hands of Venezuela.

Venezuela’s claim to Guyana’s territory, however, has not diminished or been diverted. Guyana remains imperilled. Disturbing developments within Venezuela have attracted the world’s attention and roused the concerns of many of us over the privations of its people.

“We depend on our territorial and maritime resources for development and for the release of our people from poverty,” said Granger.

The Venezuelan claim persists after 51 years of Independence. An eminent international Arbitral Tribunal provided ‘a full, perfect and final settlement’ 118 years ago in 1899. Venezuela denounced that Arbitral Award in 1962 at the Decolonisation Committee of this Assembly as British Guiana strove for its Independence.

Guyana warns the world, through this Assembly, that peace will be at stake in our region if justice does not become ascendant, not only within Venezuela, but also in respect to its border controversy with Guyana.

Four UN Secretaries-General have been seized of the Venezuelan claims. The choice has become one between just and peaceful settlement in accordance with international law, and a Venezuelan posture of attrition that is increasingly more blustering and militaristic. In this matter, protraction is the enemy of resolution and the ally of sustained conflict.

Fortunately, as they indicated publicly, former Secretary General Ban Ki Moon and current Secretary General António Guterres have decided that, under the 1966 Geneva Agreement, if by the end of the year 2017 significant progress has not been made toward arriving at a full agreement for the settlement of the controversy, the International Court of Justice will be the next means of peaceful settlement, unless Guyana and Venezuela jointly request otherwise.

Guyana has been working assiduously with the Secretary General’s Personal Representative. Guyana looks to the international community to ensure that Venezuela is not allowed to thwart the processes of judicial settlement which are the clear and agreed path to peace and justice.

Addressing the massive hurricane destruction in the region, President Granger said “a sustainable planet is humanity’s ultimate patrimony. Nothing is more vital to people’s survival. We have been indifferent too long to the need to protect the planet and now its sustainability is threatened on many fronts.”

President Granger, who sent a delegation to repatriate Guyanese and help citizens in the Caribbean devastation, said Hurricane Irma was a deadly, destructive portent of the extreme vulnerability and fragility of the small island developing and low-lying coastal states of the Caribbean. Guyana is playing its part, within the limits of its resources, to provide relief to affected populations in sister Caribbean states.”

“Climate change is not a fiction or the invention of a few extremists. The small island states of the Caribbean parts of North America, have felt the devastating fury of a series of hurricanes — Harvey, Irma, Jose, Katia, Lee and Maria

“Guyana signed and celebrated the Paris Agreement on climate change last year in this Assembly. We renew our commitment to its goals this year. This is demonstrated most positively in Guyana’s pioneering role in global environment stewardship.

He added that Guyana, in 1989— three years before the Rio Conference of 1992 – had the foresight to enter into an environment covenant with the international community by dedicating 360,00 hectares of its rainforest. Mrs. Sandra Granger, Kevin Granger and Minister of Foreign Affairs Carl Greenidge listen to the address by President David Granger in the Assembly Hall of the United Nations in New York City.
Photo by Tangerine Clarke