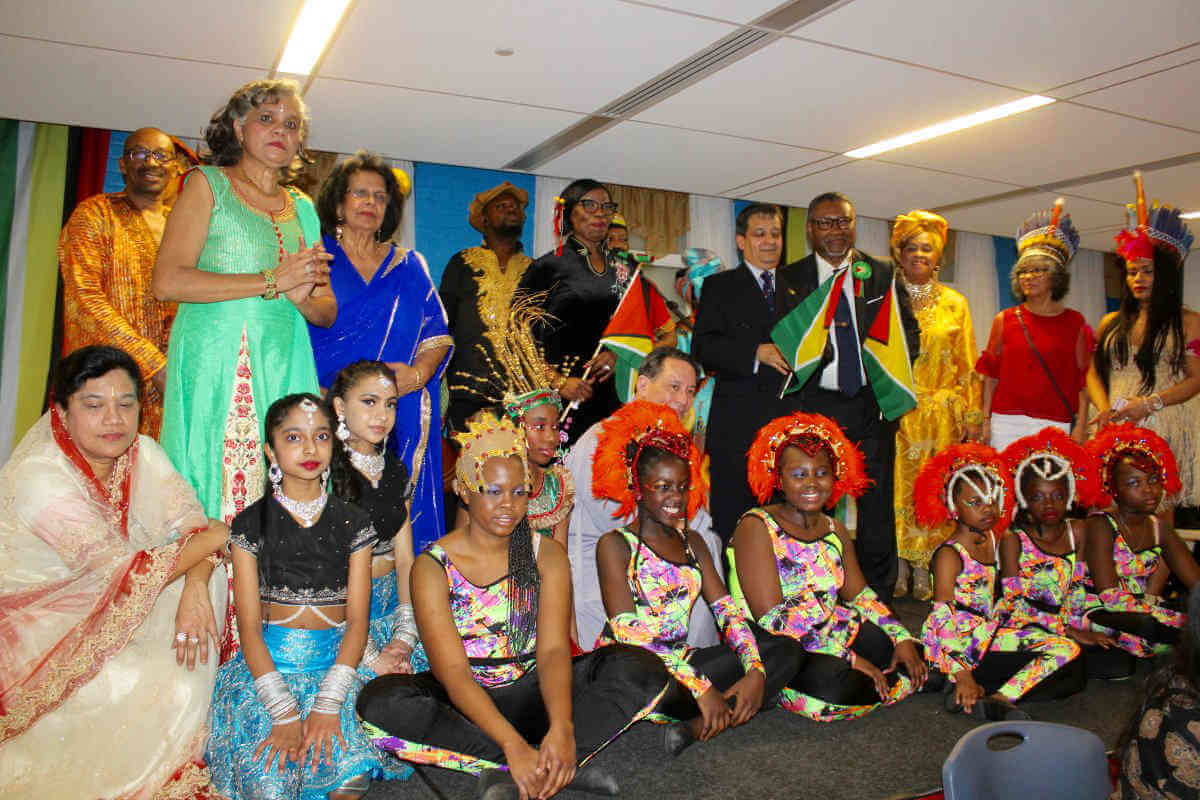 One People, One Nation, with One Destiny, was the common thread that ran through a pulsating multicultural presentation of music, dance, drumming, and a parade of Guyana’s six races, to commemorate the nation’s 49th Mashramani under the auspices of Ambassador Rudolph M. Ten-Pow and Consul General of Guyana to New York, Barbara Atherly, who, called on expatriates to celebrate Guyana’s diversity with unity and pride.

In her welcome remarks to a packed audience in the DC1707 auditorium, in NYC last Friday, Atherly recalled the festivity and jubilation that Guyanese enjoyed four years after independence, when Guyana became a Republic on Feb. 23, 1970, and encouraged nationals to delight in their rich cultural heritage, noting, ‘we are stronger together as a people, it is all about joy and celebrating our nationality, and looking into the future that is bright with everything that we hoped for.”

“Let us celebrate in true Guyanese style, as One People, One Nation, with One Destiny, keeping unity, at the forefront of our minds, and in everything that we do,” said the diplomat, who wore a Chinese national dress, and celebrated by waving the Golden Arrowhead flag.

Riyad Insanally, ambassador of Guyana to the United States of America during his greeting, called on expatriates to unite as One People, One Nation, with One Destiny, and reminded them that Guyana was on the cusp of greatness, with hope and optimism as it sets out to become an oil and gas rich nation.

Amb. Insanally, who celebrated for the first time in New York since taking up office, said the future of Guyana was in the hands of our people at home, and in the diaspora, and called on politicians to build capacity, and work together, for unity, not division, adding, that Guyana will grow from strength to strength, and applauded Consul General Atherly for hosting the cultural presentation.

Verona Flores (indigenous Peoples), Rev. Helen John (Christian), Pandit Teelack Seerattan (Hindu), and an Imam (muslin), poured blessings upon the commemoration, that heard the pulsating rhythm of the drums, by Menes de Groit, Akoyaw Rudder, and Horace Carter, in a spirited tribute, that aroused nostalgia and love of country in expatriates.

The expats, later joined in singing “Oh Beautiful Guyana,” before a tribute to the homeland on saxophone by Erwin “Flantis” Edwards, cemented an evening of reminiscence.

Guyana’s beauty was heard in the inspiring verses of “Like Amazon Rain I Dance, and “Guyana Oozing Oil” by acclaimed poet, James Richmond, who made way for “Liberation” described by emcee Kishore Seunarine, as an exotic and pulsating rhythm, performed by international dancer Zaman. Little Chutney dancers of the Abinyah Group also brought cherished Guyanese dance movement to the stage.

The program flowed to include a high-octane performance, filled with exciting elements of dance, like only the students of Verna Walcott’s Impressions Dance Theatre, could deliver.

The performers took over the stage in Mashramani-style choreography, and maintained a tempo filled with kicks, flips and splits, in “The Spirit of Mash” that delighted the packed audience, who got up on their feet and waved Golden Arrowhead flags.

Under the theme: Celebrate Mash 49 with Unity and Pride, the consulate welcomed Permanent Representative to the UN, Ambassador Rudolph M. Ten-Pow, Mrs. Bonnie Ten-Pow, and members of CARICOM states, to the exuberant presentation, that climaxed with a cultural parade of the Guyana’s six races of peoples in national dress, and narrated by Dr. Rose October-Edun.

They are Indigenous Peoples, Africans, Indians, Portuguese, Chinese, and Europeans. Guyanese nationals were later invited to a Taste of Guyana reception, where sampling of Guyanese dishes, pepperpot and bread, roti and curry, cook-up rice, sorrel, and other festive fare, that brought Guyanese closer.

Special thanks went to Chuck Mohan of DC 1707, who brought greetings on behalf of the Union, members of CARICOM states, Friends of the Consulate Committee, Mr. Carl Guilliams, Chardell Park, Chadeary Park, Mark Cheong, Beverly McDonald for the vote of thanks, and all others, who made the commemoration a resounding success. Members of the audience wavie the Golden Arrowhead Guyana flag in celebration.
Photo by Tangerine Clarke