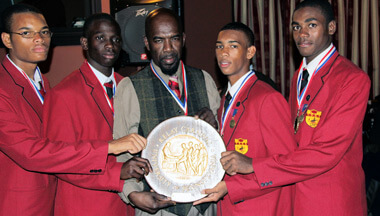 Though they did not win a gold, silver or bronze medal, athletes from the history-making Thomas Saunders Secondary School (TSSS) in St. Vincent and the Grenadines continue to thrill nationals at home and abroad by their remarkable participation for the second successive year in the prestigious Penn Relays Carnival in Philadelphia, PA.

Nationals in the United States said they were particularly proud that a school – just seven years old – in a country – just 150 square miles, was competing against the best athletes in the largest, uninterrupted collegiate and high school track event in the U.S. and, perhaps, the world.

The mere sight of Vincentian athletes on the tracks of the century-old Franklin Field stadium was enough to create goose bumps and to send thrills up the spines of their compatriots, most of whom had trekked, for over two hours by car and bus, from New York to again witness history.

The boys’ and girls’ triumph in the 4×400 (3 min., 29.79 sec.) and 4×100 (50.39 sec.) meter-heat, respectively, in unaccustomed cold weather, and their very creditable performance in the other heats, unquestionably, made every Vincentian extraordinarily proud.

“Despite my niece (Chantel Legair) not participating, I was rooting for the team, ‘Go, Thomas Saunders!’” said Joanne Legair, chairperson of the Cultural and Sports Committee of the Brooklyn, New York-based umbrella group, Council of St. Vincent and the Grenadines’ Organizations, U.S.A., Inc. (COSAGO), her voice hoarse from screaming her lungs out, along with other nationals, in the massive stadium.

As done last year, when TSSS first competed in the carnival, COSAGO organized a busload of nationals to witness the historic affair.

Though the U.S. Embassy in Barbados had denied Chantel a visa to compete in the games, her aunt, who is also a member of the Brooklyn-based St. Vincent and the Grenadines’ Diaspora Committee of New York, was clearly undaunted.

“I was so proud (of TSSS’ participation) as though you were my own,” said Joanne, speaking to the athletes after receiving a medal for Chantel from the host organization, the Philadelphia-based St. Vincent and the Grenadines’ Organization of Pennsylvania (SVGOP), at a reception on Saturday night at the Vincentian-owned Calabash restaurant on Lancaster Avenue in Philadelphia.

The SVGOP awarded a medal to each of the TSSS’ 11 athletes – six boys and five girls – as well as medals to assistant coach Kamal Hunte and teachers Dawana Balcombe, chaperon, and Paulette Williams, manager.

“I want to thank all the persons who supported us,” said Shaquille Browne, who spoke on behalf of his fellow athletes.

“Coming here for the first time, I’m so proud to be representing my country and overwhelmed to see so many of you,” he added. “I thank you for coming out and supporting us.”

Earlier, Penn Relays organizers had presented TSSS with an award for its participation in the three-day carnival, which began on Thursday and culminated on Saturday with the largest attendance of 49,310. Attendance for the three days totaled 110,000, about the same as the population of St. Vincent and the Grenadines.

The relays also attracted athletes from several Caribbean countries, including the mighty Jamaica, Trinidad and Tobago, the Bahamas, Grenada, Barbados and Guyana.

Jamaica Prime Minister Portia Simpson-Miller was on hand on Saturday to cheer on her country’s 500-odd athletes. Unmistakably, Jamaicans exceeded all nationalities, including Americans, in attendance.

Besides Dowers and Browne, the other members of the TSSS boys’ team were: Brandon Parris, Kezlon Providence, Abiola Hinds and Desron Wilson.

Harry, a physical education teacher and certified track and field coach, who, in September, will be coaching TSSS’ athletes for five consecutive years, told Caribbean Life he was also very proud of the teams’ participation overall.

“It’s a historic step for the school in bringing the first female team and winning a heat on the first outing,” he said. The girls’ team did not compete in the inaugural year last year.

“I know this will make the Diaspora people feel good to know TSSS continues to come, and also people will ask, ‘Is this all we can do?’” he added.

“But, overtime, this will get better, and our performance will improve,” continued the former national netball president.

He said besides the relatively cold weather (with an average high in the low 50s, degrees Fahrenheit, excluding the wind chill factor), limitations in the number of girls (one had shin and calf injury) and competing twice on the opening day, the girls “performed credibly,” stating that it was their fastest time in the 4x100m so far this year.

He urged the Diaspora to continue supporting TSSS’ efforts “and probably other schools who want to move it beyond talk,” intimating that some schools are not very serious in competing internationally.

“I don’t know if you guys understand the thrill to have the teams from Thomas Saunders Secondary School,” she told the reception.

“We might be small, but we came with strong voices (in cheering on the teams,” she added, urging the athletes to also excel academically.

Harry, COSAGO and New York Consul General Selmon Walters, among others, were high in praise for James Cordice, SVGOP’s former president, now serving as public relations officer, who went “beyond the call of duty” and almost single-handedly ensured St. Vincent and the Grenadines’ continued participation in the Penn Relays.

“No praise is enough for the Pennsylvania organization,” said former government minister Walters. “Mr. Cordice is the live wire, from St. Vincent and the Grenadines to Philadelphia, to get things done.”

As a director of Team Jamaica Bickle, the group that feeds Jamaican and other Caribbean athletes at the Penn Relays, including St. Vincent and the Grenadines, Cordice’s passionate appeal finally resonated with officials and community organizers in enabling a Vincentian secondary school – in TSSS – to participate at the illustrious games for the first time last year, and to continue this year.

“I’m just happy to be part of this process,” Cordice told the reception. “The effort started under my presidency, but it continues.”