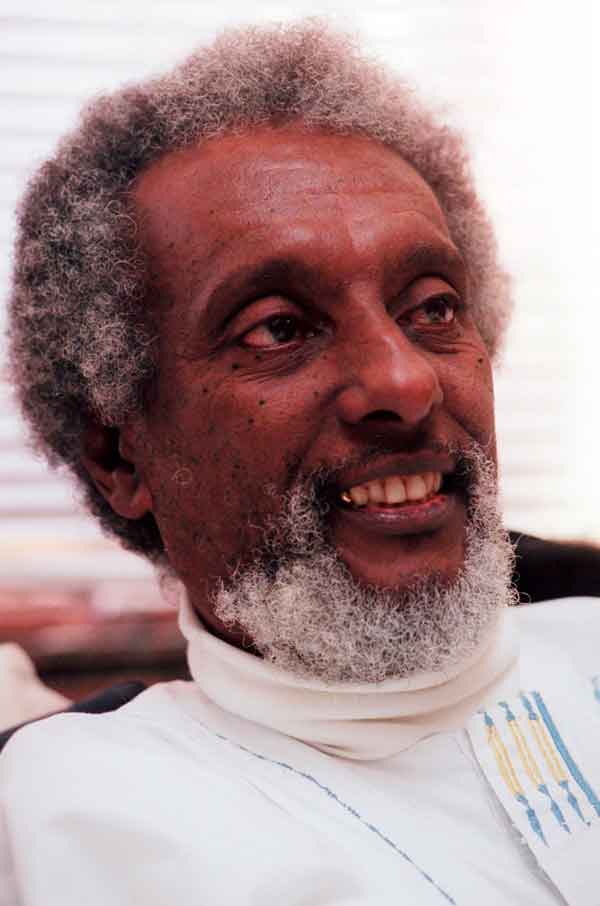 Kwame Toure, left, once known as Stokely Carmichael, smiles as he attends a news conference in the Harlem section of New York City, Thursday, Feb. 29, 1996, following his release from a local hospital after nearly a month’s treatment for prostate cancer.
Associated Press / Mark Lennihan

He graduated from Howard University and rose to prominence in the Civil Rights and Black Power movements, first as a leader of the Student Nonviolent Coordinating Committee (SNCC) and later as the “Honorary Prime Minister” of the Black Panther Party.

Born in Port-of-Spain, the Trinidad and Tobago capital, Carmichael moved to Harlem in 1952 to rejoin his parents, who had migrated when he was only two years old, and had left him with his grandmother and two aunts. He had three sisters.

As a boy, Carmichael attended Tranquility School in Trinidad until his parents were able to send for him.

His mother, Mabel R. Carmichael, was a stewardess for a steamship line, and his father, Adolphus, was a carpenter who also worked as a taxi driver.

The reunited Carmichael family eventually left Harlem to live in Morris Park in the East Bronx, which, at that time, was an aging neighborhood of primarily Jewish and Italian immigrants and descendants.

Carmichael attended the elite, selective Bronx High School of Science, with entrance based on academic performance.

After graduation in 1960, Carmichael enrolled at Howard University, a historically Black university in Washington, D.C.

His professors included Sterling Brown, Nathan Hare and Toni Morrison, a writer and poet who later won the Nobel Prize.

He graduated with a degree in philosophy in 1964 and was offered a full graduate scholarship to Harvard University, but Carmichael turned it down.

Inspired by the sit-ins in the South, Carmichael became more active in the Civil Rights Movement.

In his first year at the university, he participated in the Freedom Rides of the Congress of Racial Equality (CORE), and was frequently arrested, spending time in jail.

In 1961, Carmichael served 49 days with other activists at the infamous Parchman Farm in Sunflower County, Miss.

He was arrested many times for his activism, so much so that he lost count, sometimes estimating at least 29 or 32.

At 19, Carmichael became the youngest detainee in the summer of 1961. He spent 53 days at Parchman Farm in “a six-by-nine cell.”

In 1966, Carmichael became chairman of SNCC, taking over from John Lewis, who later became a US Congressman.

While Black Power was not a new concept, Carmichael’s speech brought it into the spotlight.

It, therefore, became a rallying cry for young African Americans across the country.

Everywhere that Black Power spread, if accepted, credit was given to the prominent Carmichael. If the concept was condemned, he was held responsible and blamed.

According to Carmichael: “Black Power meant Black people coming together to form a political force and either electing representatives or forcing their representatives to speak their needs [rather than relying on established parties]”

Strongly influenced by the work of Frantz Fanon and his landmark book “Wretched of the Earth,” along with others, such as Malcolm X, under Carmichael’s leadership, SNCC gradually became more radical and focused on Black Power as its core goal and ideology.

This became most evident during the controversial Atlanta Project in 1966.

SNCC, under the local leadership of Bill Ware, engaged in a voter drive to promote the candidacy of Julian Bond for the Georgia State Legislature in an Atlanta district.

However, unlike previous SNCC activities, such as the 1961 Freedom Rides or the 1964 Mississippi Freedom Summer, Ware excluded Northern White SNCC members from the drive.

Initially, Carmichael opposed him and voted against this move, but he eventually changed his mind.

When, at the urging of the Atlanta Project, the issue of Whites in SNCC came up for a vote, Carmichael ultimately sided with those calling for the expulsion of Whites.

After his diagnosis of prostate cancer in 1996, Carmichael was treated for a period in Cuba, while receiving money from the Nation of Islam.

Benefit concerts for Carmichael were held in Denver; New York; Atlanta; and Washington, D.C., to help defray his medical expenses.

The government of Trinidad and Tobago awarded him a grant of US$1,000 a month for the same purpose.

He came to New York, where he was treated for two years at the Columbia-Presbyterian Medical Center before returning to Guinea.

In 1998, Carmichael died of prostate cancerk, at the age of 57k, in Conakry, Guinea.

Carmichael, along with Charles Hamilton, is credited with coining the phrase “institutional racism.”

This is defined as racism that occurs through institutions such as public bodies and corporations, including universities.

In the late 1960s, Carmichael defined “institutional racism” as “the collective failure of an organization to provide an appropriate and professional service to people because of their color, culture or ethnic origin.”