BATTLE FOR THE CUP 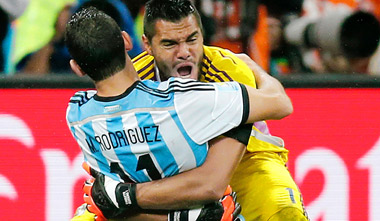 Argentina’s Maxi Rodriguez, front, celebrates with goalkeeper Sergio Romero after scoring the decisive goal during the World Cup semifinal soccer match between the Netherlands and Argentina at the Itaquerao Stadium in Sao Paulo, Brazil, Wednesday, July 9, 2014. Argentina beat the Netherlands 4-2 in a penalty shootout to reach the World Cup final.
AP Photo/Frank Augstein

And then there were two! After 32 teams battled over the past month to qualify for the 2014 FIFA World Cup championship game in Brazil’s Maracana Stadium, the largest in the world, on Sunday, Germany and Argentina are left standing. Both teams survived to play in Sunday’s final game (3:00 p.m. ABC TV) because of their experience, discipline and organization on the field.

Germany, looking to win its fourth World Cup, humiliated hosts Brazil, 7-1, in a record-setting semifinal on Tuesday in Belo Horizonte. Argentina overcame Holland in a tight overtime battle on Wednesday in Sao Paulo and prevailed to win the 4-1 on penalties to play on Sunday. The Germany-Argentina final marks the third time the teams will play each other in a World Cup final. Argentina won 3-2 in 1986 in Mexico and Germany won in 1990 in Italy. Germany will appear in its eighth final, while Argentina will be hoping to win its third World Cup; it also won in 1978 over Holland.

The most stunning upset of the tournament was Germany’s humiliation of five-time champion Brazil. Many were surprised at Brazil’s demise, but anyone watching Brazil during the tournament, would have noticed that the Brazilians struggled throughout and were not well organized defensively. Losing its top defender and captain, Thiago Silva, to a game suspension hurt them, but Brazil’s coach Phil Scolari forgot the old and true adage that defense wins championship.

When top player Neymar went out of the tournament due to a back injury, Scolari should have replaced him with a solid and proven two-way player in Ramires, who is an excellent player on either side of the ball – defensively and offensively – considering the weakened defense and the fact that Germany is experienced, well organized and disciplined. Instead, Scolari chose Bernardo, an offensive player, who seldom contributes to defense; the first goal came from the right side, where Bernardo should have been goal-side of the ball on the corner kick to help to defend.

The first goal led to the second goal, and Brazil was behind, 2-0, after 20 minutes, but this is where Brazil missed its leader, Silva, because there was no one on the pitch to help the team regain its composure and slow down the Germans to survive the rampaging German moments. David Luiz, who was the captain for the day, did the opposite; instead of helping to organize the team defensively, he bolted forward at every chance, sent long balls into a crowded Germany defense and on the lost of possession, the Germans continued to run through the disorganized Brazilians easily. After 29 minutes, Brazil trailed, 5-0, as Thomas Muller, Toni Kroos (twice), Miroslav Klose and Sami Khedira put Germany on its way to the final. Klose’s goal was his 16ht, a World Cup record, as he surpassed Brazil’s Ronaldo, who held the record of 15 World Cup goals.

In the second half, substitute Andre Schurrle scored two goals to complete the score; Oscar pulled a goal back for Brazil in the 90th minute. It was Brazil’s worst defeat since 1934, and it snapped a 62-match home unbeaten streak that started in 1975. Brazil will play Holland in Saturday’s third-place game.

The Argentina-Holland game on Wednesday was a tightly contested and very well-played battle; Argentina’s Lionel Messi was pretty much kept in check, but scored his team’s first penalty to put Argentina on its way. The experienced defender, Maxi Rodriguez, who came into the game in the final moments of the second overtime period, scored the wining penalty. Argentina’s defensive midfielder Javier Marcherano played the game of his life; after suffering a concussion, he came back onto the field and led Argentina to victory.

Argentina can keep the South American winning streak alive as a European team has never won a World Cup in the Americas, while German would like to be the first from Europe to triumph in the Americas.

Games continue every Sunday at the same venue, with a championship game scheduled for Sunday, Aug. 31, on Labor Day holiday weekend… Bradley Wright-Phillips scored twice to lead the New York Red Bulls (4-5-8, 20 pts.) to a 2-2 draw at the Houston Dynamo in BBVA Compass Stadium on Friday night, July 4. The tie is New York’s eighth this season and is unbeaten in its last four games; Houston is 5-10-3 (18 pts.).