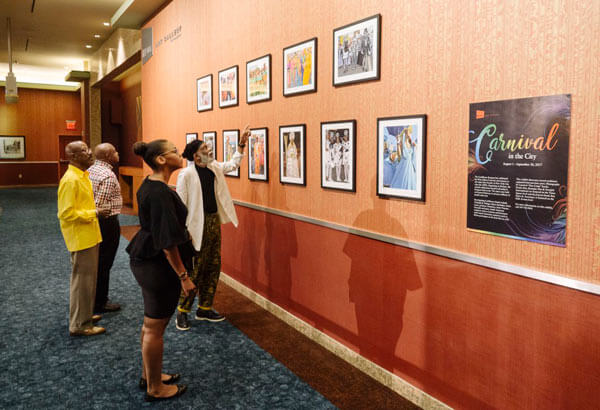 There’s a carnival in the game house.

A new exhibit honoring one of the most popular aspects of Caribbean culture opened at Resorts World Casino in South Ozone on Aug. 9. The photographic presentation titled “Carnival in the City,” will be on display at the casino until Sept. 30, showing off the glitz and color of photos from one of the city’s most festive cultural events. About a dozen of the pictures showcase the designs of longtime costume producer Roy Pierre, who has worked in the business for decades and he is well deserving of the honor, he said.

“I’ve been doing carnival costume bands since the inception of organized J’ouvert and I eventually got involved in starting costumes with parade on Eastern Parkway — so I’m not new to this. I’m a veteran to carnival in New York,” said Pierre.

This year Pierre will present his band “Untamed!” for the J’ouvert parade.

The legendary designer has an entire floor of photos dedicated to his creations. The show in total has 24 photos that are divided onto two floors of the casino — one floor of Pierre’s designs and the other floor shows pictures of mas camps.

The two-month-long exhibit that includes many images from photographer Keith Getter, features J’ouvert and the West Indian American Day Parade, is being housed in the casino until the end of September where passersby and casino-goers can take a look at some of the photos of the events through the years. The placement of the gallery in the gambling locale is a great way to get people of non-Caribbean background to grow familiar with the culture, which is often misconceived due to bad press over the years, said one of the exhibit curators and organizer.

“This could help us with the showcasing of who we are as a Caribbean community, and give a chance to expose our culture to people who are not ordinarily exposed to it,” said Karen Valentine. “There are more than 20,000 people who walk through the doors of the casino every week, so it’s very nice that they’ll get to see our culture here, especially because of the negative press coverage about J’ouvert and carnival over the years.”

She added that guests will be just as impressed by the photos in the gallery as she was, and hopes it will be a stepping stone to a larger project in the coming years.

“It’s amazing the type of imagery that we have out there — I was blown away by some of the images,” said Valentine. “I really hope people come out to see it so we can have a bigger exhibit in the future.” One of the organizers at the opening reception talks to guests about the exhibit.
Photo by Stefano Giovannini Masqueraders in costumes brought the carnival spirit to the casino for the opening.
Photo by Stefano Giovannini Mervin Taylor, a creative and cultural advisor for Pierre, gives guests an explanation of the photos which are part of the display.
Photo by Stefano Giovannini Organizers celebrate the photographic exhibit “Carnival in the City” at Resorts World Casino in Queens on Aug. 9.
Photo by Stefano Giovannini