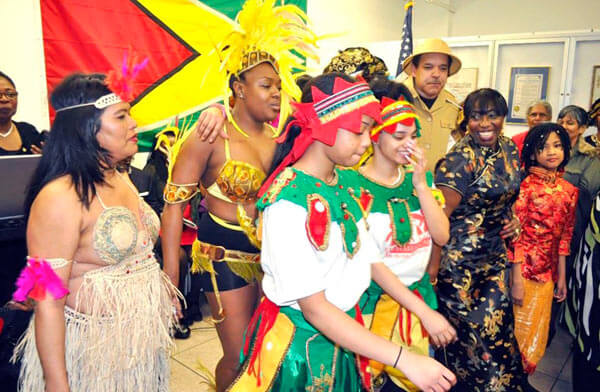 The Guyana Consulate in New York City was a scene of comradely, and jollification, on Friday, Feb. 24, when compatriots joined hands to mark their homeland’s 47th Republic Anniversary, and Mashramani celebration.

Embracing, the mandate of “unity” put forward by newly appointed Consul General, Hon. Barbara Atherly, the six races of people, hugged, shook hands, and celebrated shoulder to shoulder during an extraordinary evening of singing of folk songs, and dancing to the rhythm of the African, and Tassa drums.

Blessings on the Republic, rendered by Bishop John Cummings of Restoration Temple, Leila Singh Gossai, Hindu of Bhuvaneshwar Mandir, and Mercedes Pierre – Indigenous of the peoples of Guyana, began the event, after which, CG Atherly, in her message, implored expatriates to join hands and celebrate.

“Let us celebrate in unity so that we carry out our motto of “One People, One Nation, One Destiny – Happy Mashramani, she said.

This segment truly evoked the spirit of diversity as audience members flounced to the stirring fusion, and infectious rhythms.

Emcee by committee member Jonathon Locke, the commemoration of tributes to Guyana continued, with talented sisters Chardell Park and Chadeary Park, of Guyanese parentage who sang Oh Beautiful Guyana, with deep feelings for their heritage, and “Yet still I’ll Rise” a heartfelt tribute to Guyana.

In addition to David Correira’s impressive history of the Amerindian people, nationals enjoyed a sequence of steps and movement showcased by talented Indian dancers, Neisha Khan, Navedita Bissessar, and Chandini and Maneisha Boodhoo, in Dances of India, choreographed by Babla & Kanchan Chandini.

Latisha Dease followed up with delivered a powerful spoken-word poem titled “Negro Woman” by Langston Hughes, during the historic and electrifying presentation and evening of tributes.

The show climaxed with a Mashramani style revel of a colorful costume dancer and ethnic-dress models of the six races of Guyana, took center stage.

Guyanese-born Sen. Roxanne Persaud congratulated Guyana on its Republic Anniversary and encouraged nationals to continue to support their culture in a unified way. Richard S. David, who hopes to become the first Guyanese in the NY City Council, also expressed his gratitude to fellow Guyanese.

Deputy Consul General Jacquelyn Hamer summed it up well when she thanked Guyanese for their unwavering support of their culture and contribution in the Diaspora.

The Republic Day Committee thanked Tony Singh and Bakewell Restaurant for their donation, and Kamiyah Parchment and Gerry Elcock for rendering the national anthems of the United States and Guyana, respectively.

A special thank you went to Ambassador Rudolph M. Ten-pow for his full participation in the festivities. Guyanese in ethnic dress dance at the Guyana Consulate in New York.
Photo by Tangerine Clarke