Fundraising with rum and rythm 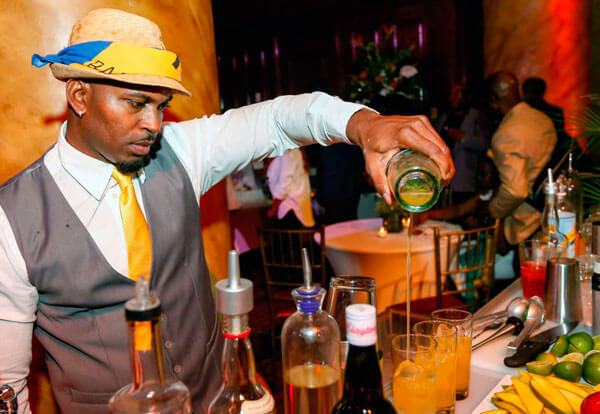 The first Friday of Caribbean heritage month kicked off with a blast-filled event to the sounds and tastes of the Caribbean, all for a good cause.

The Caribbean Tourism Organization concluded its Caribbean Week, which lasted from June 1-5, by hosting its 5th annual Rum and Rhythm Festival in Chinatown on Friday. Along with food and entertainment, attendees had the opportunity to party and participate in a silent auction to raise money for Caribbean students. At the fest, two of the best mixologists in the world competed for a final round for best mixologist.

“I mean I don’t even know how to express it. It was so much fun,” said Selma Slabiak, the crowned mixologist winner.

Slabiak praised her fellow mixology competitors, as well as her runner-up.

“I think everyone participating in this event are very driven people. I’m so excited to be a part of this,” said Slabiak. “It was never really like a crazy competition because we’re all friends and peers and we had so much fun supporting each other.”

The Rum and Rhythm benefit is organized by the Caribbean Tourism Organization to raise money for scholarships in the Caribbean, and to help increase tourism and vitality to the region.

Organizers of the event hope that guests know that they supported a wonderful event, and their presence will benefit the education of students pursuing hospitality careers.

The guests of the fest were spoiled with food, drinks, music, and had the opportunity to taste-test and sample cuisines from nearly every country in the region. Chefs represented were from Anguilla, Antigua and Barbuda, Bahamas, Barbados, Cayman Islands, Jamaica, and St. Martin and competed for best chef.

The winner of the chefs’ competition echoed the need for a multinational Caribbean event.

“Coming together is important. I’ve always believed that when the Caribbean comes together — there aren’t much places in the world that are stronger,” said Barbadian chef and winner, Creig Greenidge. “Let’s keep the camaraderie going — because for me, yes I won, but I’m not here to compete necessarily, I’m just here to cook.”

Greenidge says the energy, spirit, and community vibe at the Rum and Rhythm fest seals his return.

“I’ve been coming here for four years — and I love coming and they love me here,” said Greenidge. “I will be here next year.” Taste the culture: Chefs from all over the Caribbean came to compete and cook for guests of the Rum and Rhythm Benefit Festival in Manhattan.
Mariamma Kambon