Guyanese march for unity in Brooklyn 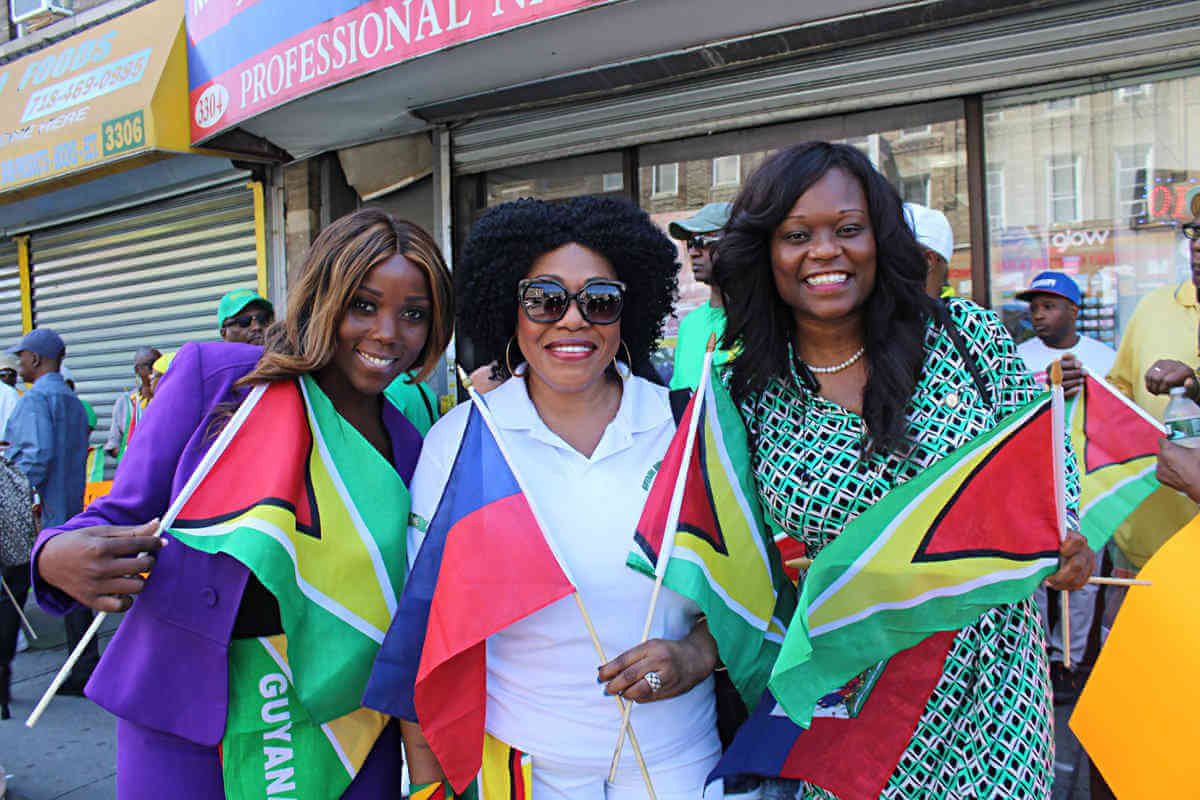 There was strong support for unity, and calls to remember Guyana’s motto: One People, One Nation, One Destiny, when hundreds of Guyanese nationals marched down Church Avenue, last Sunday with flags waving, and drums beating for a country that is polarized by division, and political uncertainty.

Minister of Social Protection, Amna Ally in a fiery speech during a rally at the corner of Schenectady Ave. & Linden Blvd., told the Guyanese diasporans, that the APNU / AFC government reaffirms its commitment to unity and brotherhood and equality among all citizens of Guyana.

Highlighting the Coalition’s achievement, Ally said the government has transformed the state from the corrupt practices perpetrated under the People’s Progressive Party (PPP).

“We cannot encourage conversations and activities that are meant to divide us, to weaken our morals, limit our potential and impede the development of our country,” said Ally.

“We must show a sense of purpose and maturity, greater mutual respect, tolerance and understand. If we are to survive as a nation, we must, put nation first at this critical juncture of our country’s history. This is exactly what the coalition is committed to,” added Ally.

“The destiny of this nation could only be unified, as Guyanese, under the continued leadership of President David Granger, a leader of great vision and integrity. The progress of this nation is for all Guyanese,” said Ally, noting, that oil reserves have put Guyana at a critical point to shift “our economy and transform the lives of all citizens.”

“Unity is our strength. We must overcome our differences for our common goal, for a pathway to true Guyanese brotherhood, unity, prosperity, and self-respect for our nation,” said the politician.

This is the second such parade, organized by the Guyana Unity Movement (GUM), that brought Guyanese together from across the diaspora, and the US, to affect positive change, with the understanding that there is only one race, the human, said president Sherif Barker- Fraser, during an impassioned speech that addressed the divisive language being heard across Guyana.

Addressing Guyana’s pending economic transformation to include oil reserve, Barker denounced the promotion of hateful language by groups that are building a platform of division, hatred and fear.

She said GUM is sending a strong message of commitment and support for people of every race of Guyana, in the diaspora and around the globe.

“We are not living in Guyana, but we are still Guyanese, working together as One People, One Nation, One Destiny,” she said.

“We are united in our strength. Today we are moved by the hope of a new tomorrow, in which the voice of every man, woman, and child, will be heard and respected, no matter their religion, ethnicity, economic status, or region in which they live in,” said the community leader.

Haitian-American Assemblywoman, Rodneyse Bichotte, and newly elected Councilmember, Farah Louie, marched in solidarity and joined in calling for unity, while renewing concerns for their Haitian brothers and sisters in Guyana who are being disrespected.

“It is important to be united, not only in Guyana but across the diaspora,” said Bichotte, reminiscing that Haiti was the first Black republic that fought the French for freedom.

She thanked Guyana for embracing and opening its doors to welcome Haitians, Indians, Chinese, and Trinidadians, as Guyana moves forward in unity and strength, as “One people, One nation, One Destiny.”

Farah Louis, newly appointed councilmember of the 45th Council District in Brooklyn, in turn, said the rally is GUM’s commitment to “unity in your community,” and a catalyst for change, that will affect generations of Guyanese, together, as “one people, one nation, continuing to one destiny.”

Dean of the School of Science, Health and Technology at Medgar Evers College, CUNY, Professor Terrence Blackman, told Guyanese “if they want to be unified, they must love their country more that anything else.”

In his bold explanation, Blackman, a mathematician, said “our survival as Guyanese in the diaspora, depends on our adherence to the values of being objective, being honest, open, fair, accountable, and being good stewards.”

Blackman quoted a speech by President David Granger that talked about love for Guyana, saying “when we think of Guyana as a bio-diversity, it represents the patrimony of the country that will be transferred to future generations. Love is what will keep this country going.”

“My message is love Guyana, if you don’t love it you are going to lose it,” implored Dr. Blackman. APNU/AFC Coalition Representative, Kamla Asha Balbachan, left, and youth, carrying a banner showcasing President David A. Granger, (center) surrounded by past Presidents of Guyana, during a march for ‘unity’ in Brooklyn.
Photo by Tangerine Clarke