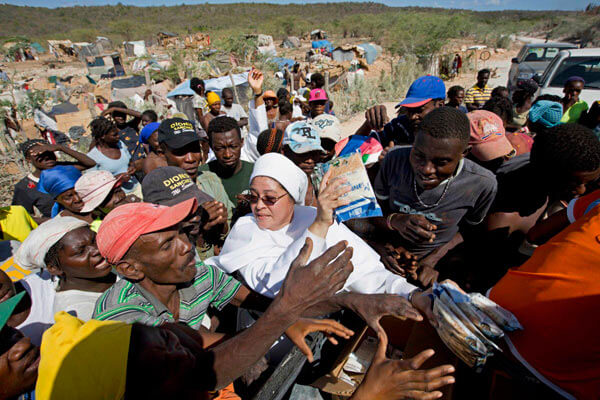 Sister Constencia of Fatima works to distribute rice, beans, oil and clothing to Haitians who were either deported or fled the Dominican Republic, at an encampment in Anse-a-Pitres, Haiti.
Associated Press / Dieu Nalio Chery, File

SANTO DOMINGO, Dominican Republic (AP) — The Dominican Republic on Tuesday granted a one-year extension to some 230,000 Haitian migrants trying to renew or obtain residency permits, an issue that has soured relations between the neighboring countries.

The announcement comes as Dominican nationalist groups demand the ouster of Haitian migrants who do not have permits, including those who enrolled in a government residency plan but only received provisional permits.

The residency plan was created after a court ruled in 2013 that children born in the Dominican Republic to non-citizens did not qualify for automatic citizenship because their migrant parents were “in transit.” The vast majority of those affected have been descendants of Haitian migrants.

Without the extension announced on Tuesday, more than 220,000 Haitian migrants could have faced deportation. They have not been able to finalize residency requirements for several reasons, including lack of a work contract, a birth certificate or a passport. Many employers in the Dominican Republic do not issue work contracts, and the Haitian government also has lagged in providing the required documents.

William Charpentier, leader of a migrant support group, praised the government’s decision but also accused authorities of deporting more than 100 Haitian migrants in recent weeks even though they had provisional permits to stay in the Dominican Republic.

Some 7,000 migrants have completed all requirements under the government’s residency plan.

Those who oppose the program accuse Haitian migrants of abusing it.

“I understand perfectly that the entire Haitian population wants to move to the Dominican Republic. They would be better off here. The question is: Should we allow it?” tweeted Vinicio Castillo, a former legislator whose party opposes the plan.

Haiti and the Dominican Republic share the island of Hispaniola, and Castillo has long proposed building a wall between the two countries. Migrants, mostly Haitians, show officers their documents as they wait their turn to register for legal residency at the Interior Ministry in Santo Domingo, Dominican Republic, Tuesday, June 16, 2015. The head of the immigration agency in the Dominican Republic says the country is ready to resume deporting non-citizens without legal residency after putting the practice on hold for a year.
Associated Press / Tatiana Fernandez, File