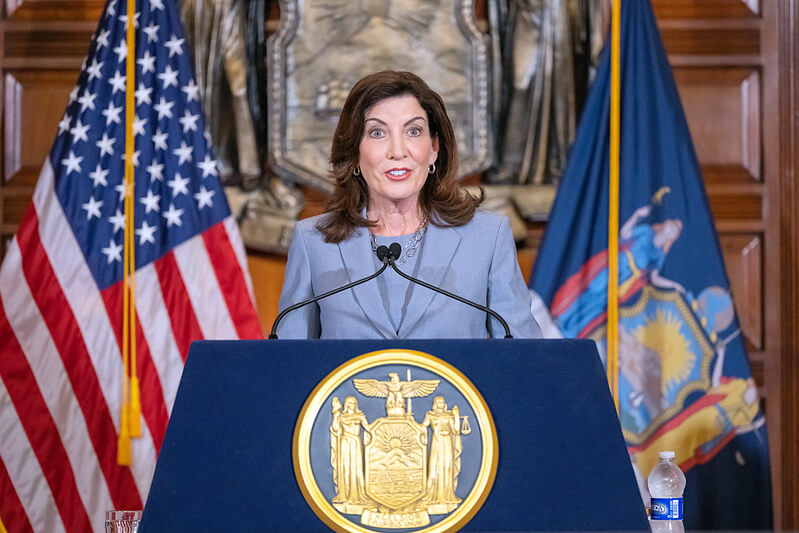 Gov. Kathy Hochul on Tuesday signed a legislative package that further upholds and strengthens the rights of New Yorkers with disabilities.

The legislative package encourages autonomy in decision making through a Supported Decision-Making Agreement and seeks to educate the public about the myriad ways people with intellectual and developmental disabilities contribute meaningfully to their communities and reduce harmful stigma and stereotyping.

The governor also issued a proclamation on Tuesday commemorating the 32nd Anniversary of the Americans With Disabilities Act.

Chief Disability Officer Kim Hill said, “I am thrilled that not only is Governor Hochul signing a legislative package aimed at protecting and supporting the rights of people with disabilities, but also holding today’s event to acknowledge the importance of the 32nd anniversary of the Americans with Disabilities Act.

“Actions such as these are what it takes to make New York the most inclusive, integrated and accessible state to live in,” she added.

Legislation (S.7107b/A.8586b) recognizes Supported Decision-Making as a less restrictive alternative to guardianship that promotes autonomy for people with intellectual and developmental disabilities and empowers them to take an active role in making choices about their own lives.

Historically, when individuals with disabilities have reached adulthood, guardianship has been the primary avenue for decision-making, Hochul said.

She said Supported Decision-Making changes the landscape in empowering individuals to make their own decisions with the support of a trusted person in their lives, while ensuring person-centered care and maximizing individual civil rights.

Hochul said the new law will formalize the legal process by which an individual with intellectual and developmental disabilities and trusted persons in their lives can reach a written agreement (a “Supported Decision-Making Agreement”) that describes the settings in which the individual desires support, the kinds of support they want from each trusted person, and how they want to receive that support.

It will also create obligations and corresponding immunity from liability for third parties to honor and effectuate supported decisions made using a Supported Decision-Making Agreement.

Legislation (S.6300c/A.7356c) requires OPWDD to develop and implement a public awareness campaign that combats discrimination stigma and stereotyping of people with developmental disabilities.

State Sen. John W. Mannion said, “As Chair of the Disabilities Committee, I have vigorously pursued an agenda of equality and fairness for every New Yorker with a disability and their families and Gov. Kathy Hochul has been a true partner in these efforts.

“These new laws will make our state more inclusive by combatting stigma and ensuring those who need services have a voice in their care and life decisions,” he added.

Assemblymember Jo Anne Simon said, “Today is a good day.  We will change the landscape and empower people with intellectual and developmental disabilities by legally recognizing Supported Decision-Making Agreements, and allowing for decision-making supports to be formalized by individuals in need of assistance in making decisions for themselves, while also combatting discrimination against New Yorkers with disabilities.

“I’m grateful to Governor Hochul for taking this decisive action and signing S.7107b/A.8586b,” she added.

Assemblymember Carrie Woerner said, “I am pleased that Governor Hochul has signed into law this legislation.  Individuals with intellectual and developmental disabilities deserve to be treated with dignity and respect.

“A public service campaign highlighting the accomplishments of people with developmental disabilities will help counter the stereotypes that persist in our society, and hopefully lead to more fair and equal treatment,” Woerner added.

Legislation (A.7882a/S.6789a) replaces references to “mentally retarded” in numerous sections of New York State law to more accurate terms such as with “people with intellectual or developmental disabilities.”

Hochul said New York demonstrates respect for a marginalized population by replacing archaic and offensive terms with modern and acceptable terms that are representative of the respect and dignity that people with intellectual and developmental disabilities deserve.

State Sen. Roxanne J. Persaud said, “There is no place for the “R” word in our vocabulary and certainly not in our laws.  Until today, 32 years after the Americans with Disabilities Act, and twelve years after Rosa’s Law, our statutes have been riddled with degrading and disempowering language toward people with disabilities.

“I thank Gov. Hochul for signing S.6195-B and S.6789-A, which replaced more than 200 instances of the “R” word with people-first language across various state laws intended to protect and uplift New Yorkers with disabilities,” added the Guyanese-born representative for the 19th Senate District in Brooklyn.