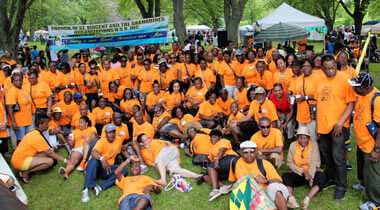 COSAGO and SVGOP contingent at the Vincentian Unity Picnic in Canada.
Photo by Nelson A. King

Thousands of Vincentians from all walks of life last Saturday converged on Brown’s Bay Provincial Park in the 1,000 Island area in southeastern Ontario, Canada, for the annual massive Vincentian Unity Picnic.

Nationals came from home, the Caribbean and other places, including major cities in the United States – New York, Philadelphia, Boston and Washington, D.C. – and Canada – Montreal, Ottawa and Toronto – for arguably the largest picnic in North America.

According to Canadian tourism officials, Brown’s Bay Park, on the outskirts of Mallory Town, is the oldest of all of the parks along the St. Lawrence River.

Before the St. Lawrence “Seaway” came into existence, Brown’s Bay was the only provincial park between Gananoque and the Quebec border, officials said.

They also said Brown’s Bay continues to be a popular stopping point for travellers to enjoy some outdoor recreation en route between Toronto and Montreal.

In picture perfect weather, with sunny skies and temperatures in the 80s (degrees Fahrenheit), over 18,000 nationals dined, drank, danced, sang and had just plain fun in a true, exhilarating spirit of Vincentian unity.

“I’m very overwhelmed by the amount of people we have here today, taking into consideration the malicious rumor we had last year,” Jack Dear, president of the St. Vincent and the Grenadines Association of Montreal and an executive member of the organizing group, referring to rumors last year that Canadian immigration authorities would round up undocumented nationals at the picnic, in a Caribbean Life interview.

The St. Vincent and the Grenadines’ Associations of Montreal, Ottawa and Toronto collaborated in organizing the annual pilgrimage.

Tom Austin, a past president of the St. Vincent and the Grenadines Association of Montreal and also an executive member of the organizing group, said the picnic, which started in 1985, has to date been incident-free.

“People come here and have fun,” he said. “Even though we have a big crowd, we’ve had no incidents.

“It’s a marvelous opportunity for Vincentians in North America to get together,” he added. “We’re pushing a lot of our culture. We’re attracting new people, which is good.”

The fun-filled, day-long event also featured games zones and live entertainment at the main stage in the center of the sprawling park, bordering the St. Lawrence River, showcasing Vincy talent.

There were performances from, among others, Lone Wolf (Ottawa), Lively (New York), and Gideon James and Ricky Bowman (Toronto).

Additionally, the inaugural St. Vincent and the Grenadines Idol segment featured Toronto resident Munirah Hutchinson, 16, who sang Adele’s “Someone Like You”; Montreal-based sisters Trisha and Nicole George, 10 and 12, respectively, who sang Adele’s “Sky Fall”; dance routines from Adanna Ubochi, 7, of Toronto, and Xhanun Hutchinson, 13, also of Toronto; and a poem Kade Audain, 16, of Montreal.

Adele Adkins is the British singer whose 2008 debut album won two Grammy Awards and made her a leading pop singer in the United Kingdom and the United States.

Many businesses and government agencies also used the event for promotion, including the St. Vincent and the Grenadines Tourism Authority.

“We do this every year to remind the Diaspora that St. Vincent and the Grenadines is in business for vacation and to encourage nationals to travel home,” Shelley John, Director of Sales, Canada told Caribbean Life.

Kinda “Edy” King-Keizer, treasurer of the St. Vincent and the Grenadines Association of Toronto, said she looks forward to attending the event annually with her extended family – husband, children, mother, father, sisters, brother and in-laws.

“I get to share part of my Vincentian culture with my children (two sons),” she said, while helping her husband to roast corn and barbecue chicken on an open grill.

A few yards away, Suzette Joslyn, who also resides in Toronto, chipped in by helping to peel potatoes for lunch for four busloads of nationals who trekked from the U.S., organized by the Brooklyn-based Vincentian umbrella group, Council of St. Vincent and the Grenadines Organizations, U.S.A., Inc. (COSAGO), and the St. Vincent and the Grenadines Organizations of Pennsylvania (SVGOP).

“Every year, I’m here,” Joslyn said. “It’s always a good time, and I always have fun.

“It’s the meeting central,” she added. “You don’t see people for years, and it’s like the connection spot.”

James Cordice, coordinator of the SVGOP’s leg of the U.S. trip, said the get-together must be highly applauded.

“It creates a medium for Vincentians to come together and celebrate their oneness,” he said, adding that the opportunity should also be used to “seriously raise funds” to help Vincentian athletes at home to attend the annual Penn Relays in Philadelphia. Over the years, COSAGO and SVGOP have been selling raffle tickets at the picnic to support athletes at the games.

“I am going to make a serious push to the Canadians (Vincentian-Canadians) to help raise funds for the Penn Relays,” continued Cordice, who is also coordinator of Vincentian athletes at the Penn Relays and ex-president of SVGOP.

“For COSAGO, we look forward to the trip every year,” she said. “People meet people who they haven’t seen in a very long time.”

O’Brien Simmons, who coordinated the COSAGO portion of the trip, lauded Vincentian-Canadians for spearheading the event.

He also said Vincentians in New York and Philadelphia “will be coming stronger and stronger,” as the third annual Unity Picnic will be held on Aug. 16 at Heckscher State Park in Long Is.