Reports of police harassment in Jamaica 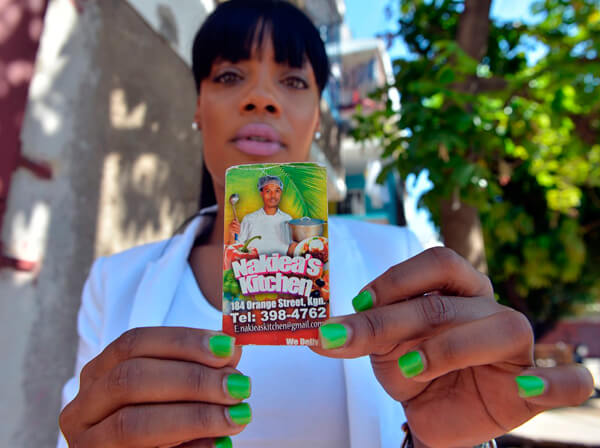 In this April 15, 2014 photo, Shackelia Jackson-Thomas holds up a business card decorated with a photo her late brother Nakiea Jackson who was fatally shot by police outside of his small restaurant, in Kingston, Jamaica. Jackson-Thomas’ brother is one of over 2,000 citizens killed by police in the last decade.
Associated Press / David McFadden

The London-based human rights watchdog, Amnesty International, claims that some Jamaican police officers harass and intimidate relatives of slain victims in order to prevent them from seeking justice.

“Police officers have raided relatives’ homes to stop them from showing up at court hearings, harassed witnesses to prevent them from testifying and intimidated those who managed to be heard inside the court room,” she claimed. “In some cases, police officers have even appeared at the victims’ funerals, in a bid aimed at intimidating the surviving relatives and deterring them from pursuing justice.”

“We are scared of the police, of their very presence,” Salomón quoted Shackelia Jakson, sister of Nakiea Jakson, then 29, who was reportedly killed by police on January 20, 2014, while he was busy cooking a large lunch order of fried chicken for the local branch of the National Blood Bank.

According to eyewitnesses, a police officer stormed into Nakiea’s shop in capital Kingston and shot him.

The young man was thrown in the back of a police car and taken to hospital, where he died from two gunshot wounds according to an autopsy. Nakiea had been unarmed at the time of the shooting, according to witnesses.

Salomón said police officers had been looking for an alleged crime suspect — a man with dreadlocks — and that Nakiea fit that description.

“This violence is affecting a lot of children in the communities,” Shackelia Jakson said. “If justice does not prevail, we all become targets, we are all in danger.

“This fight for justice has taken over my life,” she added. “I had to quit my studies, cover all the expenses we had to face over the last three years. I see my father die slowly every day, because of the raids, the harassment, the lack of action.”

In a “shocking, but unsurprising, turn of events,” Salomón said the case against the police officer who shot Nakiea was dismissed in July after one of the key witnesses refused to appear in court, “too afraid of what could happen afterwards.”

She said the family is appealing the decision and remains determined to see justice delivered.

“The problem in Jamaica is the system,” Salomón further quoted Shackelia as saying. “The system is broken. While I know the shooter is responsible for my brother’s death, it is the system that has allowed this to happen in this and so many other cases.”

Amnesty International said Jamaica has one of the highest crime rates in the Americas, with 43 murders per 100,000 inhabitants recorded in 2015 alone — only behind Honduras, El Salvador and Venezuela.

Over the past two decades, the human rights watchdog said Jamaican authorities have sought to fight the country’s crime rate with a “tough approach, which has resulted in more than 3,000 killings by the police since 2000.”

In 2015, Amnesty International said eight percent of all murders committed across Jamaica were at the hands of law enforcement officials.

“The Jamaican authorities claim they are taking steps to tackle this crisis,” Salomón said. “But, despite a steep reduction in cases of killings by the police over the last three years, most of the cases have not yet reached the courts and remain in impunity.

“Despite overwhelming evidence of police involvement in the crimes, only a handful of officers have been convicted of murder in the last two decades,” she added.