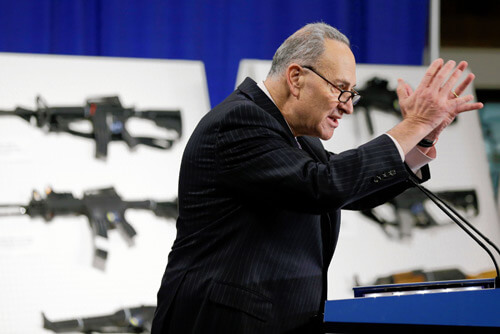 Officials in the Obama and Schumer Administrations this week announced a first-of-its-kind law-enforcement tool to help combat the spate of violent prescription drug robberies taking place across New York state.

Last year, in the wake of the deadly incidence of pharmacy robbery on Long Island, the senator had asked the Office of National Drug Control Policy and the Drug Enforcement Administration to create a comprehensive. “Compstat-like” database to track and investigate prescription drug-related crimes. When COMPSTAT was Introduced in New York City, it allowed law-enforcement officials to target their resources more efficiently; and crime dropped. The pharmacy robbery database is intended to have the same effect, and on Monday, Sen. Schumer, Director of the Office of National Drug Control Policy (ONDCP) Gil Kerlikowske, and New York/New Jersey High Intensity Drug Trafficking Area (HIDTA) Regional Director Chauncey Parker announced a first-of-its-kind database of prescription drug-related crimes in New York.

Last year, in the wake of a deadly drug store robbery on Long Island in which an off-duty Alcohol, Tobacco and Firearms agent was shot and killed, Schumer had urged the Drug Enforcement Administration to create such a comprehensive database on the crime in conjunction with local law enforcement officials . They agreed, and the database will be used to determine trends and patterns of prescription drug- related crimes in the region, and also serve as a tool in fighting the deadly epidemic.

Sen. Schumer said the information provided by this database will allow law enforcement officials to target resources to high crime areas, determine which prescription drugs are the most sought after, and determine necessary security changes in drug distribution networks. It will be available to local police departments, HIDTA drug Iitelligence officials, and DEA officials, and will help bridge the information barrier that sometimes exists between law enforcement officials on various levels.

“This statewide ‘COMPSTAT’ of prescription drug crimes is what we need to methodically fight back against the growing and complex problem of violent pharmacy robbery statewide and, hopefully nationwide,” said Schumer. “It will allow local and federal law enforcement officials to target their resources most effectively, and predict crime trends before they become deadly problems. This is exactly what we called for in the wake of last year’s tragic robbery, and I’d like to thank everyone involved on the federal and local level for getting this done. Knowledge is power, and I’m confident this tool will make a real difference in the hands of law enforcement officials at the local, state, and federal levels.”

“The severity of the prescription drug abuse threat in New York and across the nation requires us to take a holistic approach to this epidemic,” said Kerlikowske. “Pharmacy robbery is an unfortunate – and sometimes tragic – consequence of the prescription drug epidemic. Without Senator Schumer’s attentiveness to the issue, and the hard work of federal, state and local officials, this tool would not have been created. The Obama Administration will continue to remain laser-focused on this challenge and we look forward to expanding our work with both public health and public safety officials in this endeavor.”

The database provides law enforcement agencies access to prescription-related robbery and burglary police reports. The purpose of the database is to identify pharmacy security gaps and allow a proactive analysis of emerging crime patterns. The database contains case by case information including a map of the location, a Google street-view, police department complaints, and a printable format of the case. Information in the database is collected first by assigned users in each region who can edit the database with prescription crime incidents. The DEA provides quality control to the data being entered by checking completed entries. Incidents are monitored and identifiable links are communicated to law enforcement agencies.

The database has been up and running since the beginning of the year and there are currently 108 total cases in the database in New York State. This includes 50 burglaries, 21 attempted burglaries, 32 incidents of robbery and five of attempted robbery. Oxycodone and hydrocodone products dominate the targeted pills. These crimes are from 2012.

According to the Centers for Disease Control and Prevention (CDC), deaths from prescription painkillers have reached epidemic levels in the past decade. The number of overdose deaths is now greater than those of deaths from heroin and cocaine combined.

As the numbers show, pharmaceutical drug theft, whether it takes the form of robbery at pharmacies, hijacking of pharmaceutical delivery trucks or other forms of theft, is a growing concern for law enforcement officials nationwide. According to the National Drug Intelligence Center (NDIC), the amount of Controlled Prescription Drugs (CPDs) stolen in armed robberies has doubled from more than 500,000 milliliters to nearly 1.1 million in 2007, while the amount lost in transit increased from more than 1.4 million milliliters in 2003 to more than 2.5 million in 2007. Since 2007 over 1800 pharmacies nationwide, have been robbed.

Last year, in response to the increased use of illegally obtained prescription pain killers, Sen. Schumer called on the ONDCP and DEA to share information that the agency catalogues on the theft of controlled substances and other prescription drug-related crimes to local law enforcement agencies. In a letter to the DEA, the senator stated that such access would allow the Nassau-Suffolk counties to work with the NY/NJ High Intensity Drug Trafficking Area program (HIDTA) and assist in the creation of a database for local law enforcement to determine trends and patterns of prescription drug-related crime in the region.