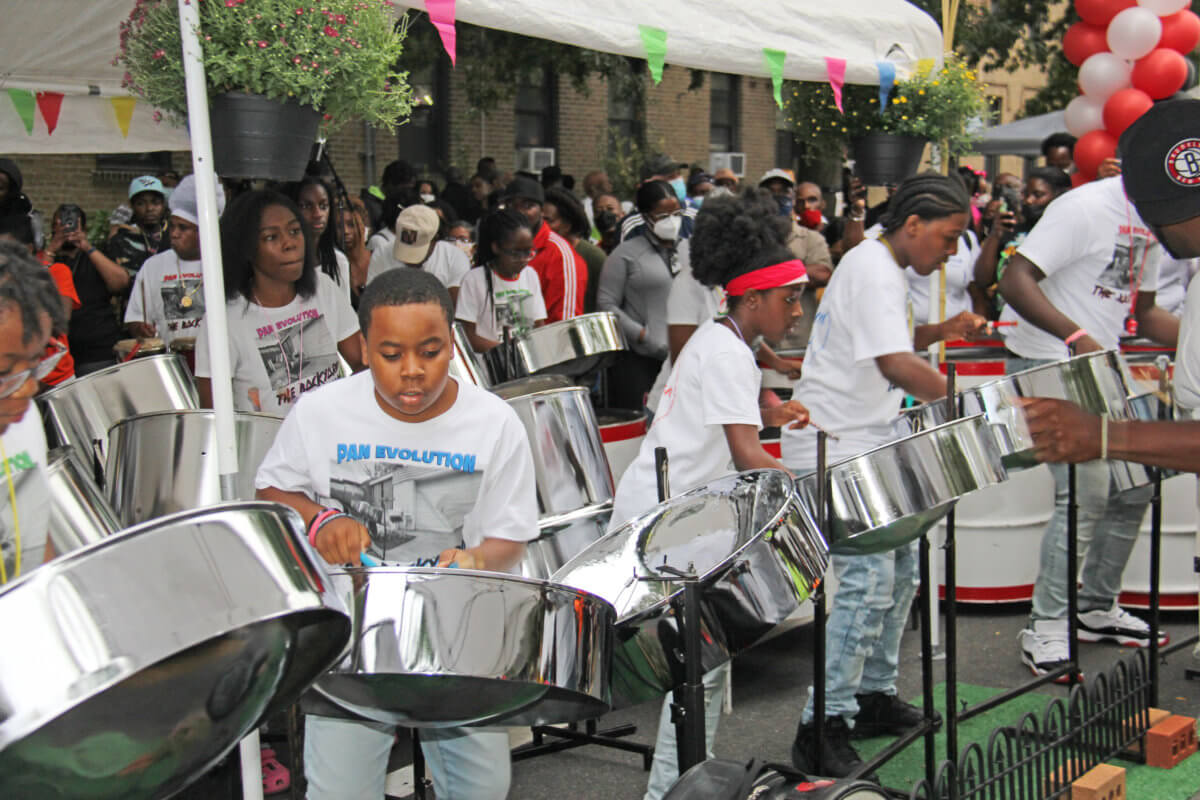 Target, DYCD, CypressHills Cemetery and EmblemHealth sponsored the festival which was held on the entire block on St. John’s Place, between Kingston and Brooklyn avenues.

Wayne Bernard of Pan Evolution — which won the competition — whose band motto is “Together as One,” said he loved competing “alongside the steelpan community and looked forward to celebrating his culture.”

“We’re back outside, and it’s exciting!” said Yolanda Lezama-Clark, president of CLACC-C and daughter of the late Carlos Lezama, the founder and former president of the Brooklyn-based West Indian American Day Carnival Association (WIADCA), organizer of the annual massive carnival parade on Brooklyn’s Eastern Parkway.

The parade is cancelled this year, for the second year in a row, because of the COVID-19 pandemic.

“It is exciting to celebrate the children’s commitment to playing and practicing steel pan this year,” Lezama-Clark said. “Pan is meant to be experienced in person.”

“There is nothing better than the sound of pan — to keep our culture alive,” Parker told the massive crowd. “Thanks to Lezama-Clarke for this; that is unique to our culture.”

The term-limited Eugene, who will demit office in January, said “the children are the most import asset of our community, and music is the best tool.

“Thank you for organizing this festival — and to the children who do the positive things,” he said. “We’re proud of you.”

Leah Clark-Brisard, daughter of Lezama Clark and line producer of the event, told Caribbean Life that the showcase was “very heart-warming, because it brings so much joy to the youth.

“And we’re making a difference in the lives of inner-city kids, and that means a lot to them,” she said. “This is constructive to their lives.”

CLACC-C, a non-profit institution, said it is “devoted to the development, promotion and preservation of Caribbean culture and history through the collection of archives and art memorabilia.”

Established in 2005, CLACC-C said its mission is “to educate communities regarding Caribbean heritage.

“It promotes and preserves West Indian Culture and history through the growth of an archive center dedicated to the legacy of Carlos Lezama, the ‘godfather’ of Brooklyn’s annual Caribbean Carnival on Labor Day,” CLACC-C said.