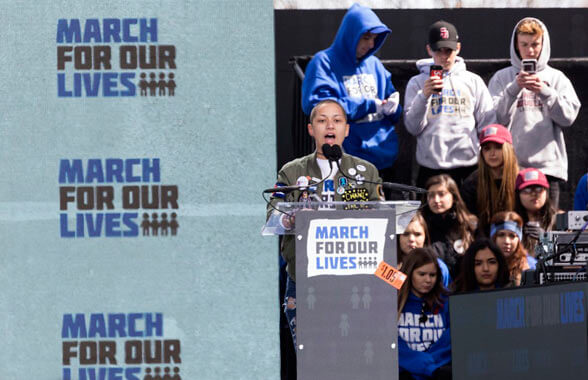 Emma Gonzalez, a student and survivor of the Parkland speaks at the first-ever March for Our Lives Rally in Washington, D.C. on Saturday, March 24, 2018.
Photo by Cheriss May, Sipa via Associated Press

“…A Little Child Shall Lead Them” Isaiah II:6

“Welcome to the revolution,” Cameron Kasky, a Stoneman Douglas student from Florida said to millions of television viewers as well as the large crowd that packed at least 10 blocks of Pennsylvania Avenue in Washington D.C. to join the March For Our Lives campaign.

“To the leaders, skeptics and cynics who told us to sit down, stay silent and wait your turn: Either represent the people or get out,” the teenager added.

“Stand for us or beware. The voters are coming.”

On the eve of Palm Sunday which kicks off the holiest week of Christian religious observances, the Z generation spokesperson and survivor of the Valentine’s Day massacre that resulted in the death of 17 individuals at his school, Kasky articulated a commitment to accomplish what Baby Boomers, Generation X, Milennials and many more before them failed to execute.

Reportedly, nearly 200 people have died from gunfire at schools since 1999, and more than 187,000 students attending at least 193 primary or secondary schools have experienced a shooting on campuses during school hours.

The most recent shooting took place last week at Great Mills High School in Maryland, where 16-year-old Jaelynn Willey was killed by her 17-year-old former boyfriend, who also died.

An analysis found that Hispanic students are nearly twice as likely as white students to experience gun violence at school and Black students three times as likely.

Kasky and many of his army of revolutionaries were not yet born in 1999 when two deranged gunslingers opened fire killing 13 students at Columbine High School in Colorado. Most of his fellow students were either crawling, learning to talk and walk in 2012 when another gun wielding American shot 20 elementary school children and six adults at Sandy Hook Elementary School in Connecticut.

However, the 17-year-old, junior who co-founded the anti-gun movement and the majority of demonstrators were coming of age in 2016 when a terrorist walked into an Orlando night club in their state and gunned down 49 patrons. The fact no gun reforms were made after those heinous acts and one year later, in Las Vegas, Nevada, another 58 people lost their lives to assassinators must have resonated with the next generation of voters.

They have chosen to act.

When fire visited their school, they resolved to respond with fury and a revolution.

That revolution is being televised and was seen throughout the world on March 25.

They organized, mobilized and one month after the shootings staged a national, 17-minute walkout from class to honor each innocent life claimed during the tragedy.

Although pressed with chores, homework and other demands the students also called for a march on Washington D.C. That call was heard by billionaire Oprah Winfrey, millionaire George Clooney and other Hollywood millionaires who chipped in to fund the national protest.

Less than two months after the fatality, Kasky spoke to millions about reforming the American society and the millions that may have become desensitized to gun violence.

His statement alerted his elders, elected officials, the National Rifle Association and the next generation of voters.

Another survivor and his fellow-student Emma Gonzalez also struck a nerve when she dramatized the plight she faced during the terror-filled spree at her school.

She managed to transmit her overwhelming emotion by naming the 17 heroes that perished. She also remained silent for as many minutes as the shooter took to gun down them down.

At three minutes individuals tried to break the silence shouting “we love you Emma.”

Others cheered, but Gonzalez stared straight, tearfully waiting for the tick tock to the six minutes 20 seconds the crazed shooter spent searching for victims.

The haunting dramatization resonated with victims of gun violence who spoke about staring into the barrel of pointed weapons, eluding gunfire by huddling under desks and many who explained how they ran for their lives.

And although the revolution started after another school shooting, youngsters in every state used the opportunity to speak to the preponderance of guns that have claimed lives of their loved ones.

Here in New York, FAGs, TAGs, MAGs, GAGs, SAGs met early in the day at 72nd St. & Central Park West for a similar purpose — to say as fathers, teachers, mothers, gays, students they are against guns.

Gathered at the uptown starting point before 175,000 marchers including Gov. Andrew Cuomo represented and supported the anti-gun movement, they carried banners identifying the acronyms that distinguished them in solidarity with the cause.

Musician Paul McCartney, a former member of The Beatles joined the group at the starting point.

“I am here because a friend mine was killed right here.”

Needless to say he was referring to the reckless murder of his colleague John Lennon who was shot in 1980 by an alleged disturbed fan at the 1 West 72nd St. address of the Dakota Apartments.

Despite recent arguments to avoid discussion of reforms, the United States does not have a higher rate of mentally ill people than other developed countries.

Often introduced to stave off proposals to limit the sale of guns, other excuses include conversation that any ban would impinge on second amendment rights which provide citizens with a right to arm themselves.

First amendment proponents are claiming that at the time the Founding fathers were probably alluding to muskets not rapid fire bump stocks and semi-automatic weapons.

Demonstrations in solidarity were held in 800 cities in every state and on six continents throughout the world.

Throughout the day, an ultimatum was issued to legislators who support the NRA; those against reforms of gun laws, the banning of assault weapons, background checks and those who oppose revising state laws permitting youths to buy guns and ammunition.

“People who are being funded by the NRA are not going to be allowed to remain in office when midterm elections roll around. They’re going to be voted out of office. Incumbency rates are going to drop,” high school senior Gonzalez said.

The 18-year-old and many of her friends will be eligible to vote in midterm elections and in 2020 when a president is decided. They vow to win the revolution by voting out elected officials who do not comply.

Part of their action plan is to engage in a massive voter registration campaign on all campuses.

Following in the footsteps of her iconic grandfather said: “My grandfather had a dream that his four little children would not be judged by the color of their skin, but by the content of their character. I have a dream that enough is enough! And that this should be a gun-free world, period.”

A chant from the crowd echoed afterwards with “Enough is enough.”

Living legend and Georgia state legislator Rep. John Lewis who marched alongside Dr. King as a youth joined 30,000 marchers in his state.

“We are never too young — and never too old — to march, to speak up and find a way to do something about gun violence.”

“We lost a leader that I got to know and work with 50 years ago by the name of Martin Luther King Jr. because of gun violence,” Lewis said.

Draped across a building in Williamsburg, Brooklyn on the revolutionary date: “Schools are for grades…not guns and blades.”

Hand written on a bed-sheet, it was clear that parents and students had a voice and on March 25 were prepared to use it.

The youths will stage another nationwide student walkout on April 20, the anniversary of Columbine.

Also planned are marches on every state capitol.