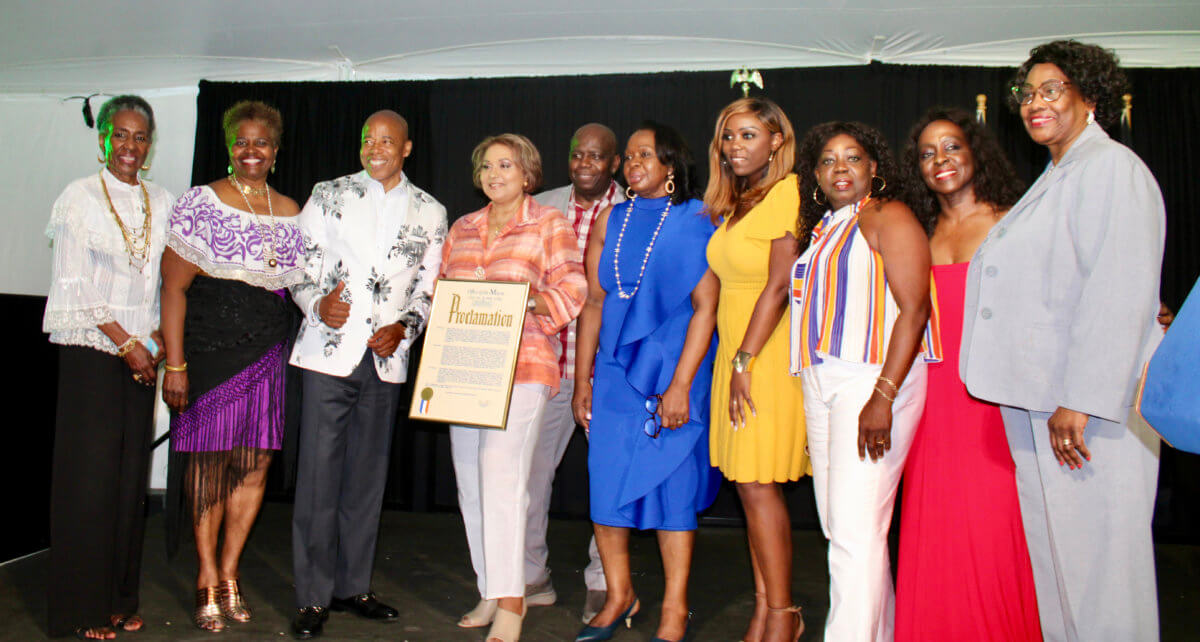 Mayor of the City of New York, Eric L. Adams, proclaimed June 2022 Caribbean American Heritage Month, and issued a proclamation that in part thanked Caribbean Americans for their invaluable contributions to the city, during his first celebration on Thursday, June 30, since becoming the 110th mayor six months ago.

Decked out in a white floral jacket, Mayor Adams, in a shout out to his predecessor, quipped, “be honest, Bill DeBlasio never had a jacket like this,” before welcoming more than 1000 nationals to the grounds of Gracie Mansion with a pledge to never forget the Caribbean community whose commitment helped him to be voted into one of highest offices in New York.

Shrugging off naysayers, that said it was impossible to win certain demographic, Adams who received overwhelming support from nationals, recalled the seeds he sowed based on years of commitment and dedication, standing up for a community that said, “if you stand for us, we will stand for you and never abandon you.”

Thanking nationals, the politician spoke of being on the radio with “Dahved Levy, rocking you, rocking you, to stomping up the Eastern Parkway during the Caribbean day parade, going to your houses of worship, going to your Independence Day flag raising, year after year.”

He said he supported every issue that was important to the community, and was connected in a real way, “and when the time was challenging, and other people turned their backs you said it’s not happening, we’re going straight ahead, and because of that, we are on the lawn of Gracie Mansion, this is your mansion, this is your victory, you made it happen.”

He added, that he has only been in office for six months, and for the first time in history his administration was issuing childcare vouchers to immigrant families and children so that they would be able to participate.

The politician also rolled out 100,000 summer youth jobs, noting the difficulty children experienced during the pandemic, and pledged to open schools during the summertime so that students have an opportunity to expand on their education.

“You will continue to see the progress of what we have been denied for so many years living in this city,” he said, adding, “I did not get here just to be a black face in a high place. I got here to make sure that you change the city.”

This is the moment we have been waiting for. You worked hard. You knocked on doors, you rallied people. You were committed, you were dedicated. This is one of the most significant celebrations, we are doing to acknowledge our Caribbean diaspora.”

“Every island is represented here today. And what you have contribute to this city. When you look at the energy and spirit of the Caribbean people. We all know how hard it was coming to America, leaving some of your family home to come here. And when you arrive you were willing to do whatever was needed to succeed. Education, small businesses, making a connecting, investing in real estate, opening shops, all of that you did to get to this moment to get here. We started from the bottom now we are here.”

Adams lauded Caribbean nationals for aiming high to achieve whatever it is they wanted, saying, “If I am successful, you are successful,” with plans to build a relationship with the Caribbean community, since problems they are facing back home, are being fed “from this country.” He identified gun violence as one of the scourges that is finding its way in the Caribbean.

In closing, Mayor Adams said on behalf of his entire team “I want to thank you. I am the mayor of the city of New York, because you were there for me, and I will never forget you for what you have done. Good friends walk in the room, while everyone else walks out, and my room has been filled, because you have constantly walked in.”  He added that he still hears the voice of his mother who transitioned last year, saying, “son, you got this,” he told the crowd, in a quest to make the city a place for all to succeed. And before leaving the stage, the politician was surprised by former Deputy Brooklyn Borough President, Yvonne Graham, who had flown from Jamaica to attend the Gracie Mansion event.

The mayor who lauded emcee, Hazra Ali, for her long-standing service, since he was Brooklyn Borough president, and presented the proclamation, also issued “Certificate of Appreciation” to businessman, Cherwin H, Johnson, Lamont Joseph, who performed a choreography to Lord Kitchener’s song, “Old Lady Walk a Mile and a Half,” and Jamaican Reggae singer, Johnny Osbourne, who sang his classic “Buddy Bye.”

Attorney Sylvia Hinds-Radix, the first Caribbean woman, and first black woman to hold the position as the city’s corporation counsel, nominated by Mayor Adams, in her remarks, reminisced about her journey migrating from Barbados, where she envisioned her career path from age eight.

Expressing gratitude to the mayor for nominating her to the position, Judge Hinds-Radix noted that Mayor Adams, did so to ensure she would not be the only minority in this role, and credits her Caribbean culture for her achievements, inspired by her mother who preached the importance of education.

The evening’s proceedings that opened with the national anthem, performed by the Sesame Flyers Steel Orchestra, included a history lesson from Mackie Holder, CG of Barbados to New York, blessed by Pastor Patrick Perrin, and enjoyed by patrons who enjoyed a wide variety of Caribbean food, before a vote of thanks by Councilmember of the 45th District in Brooklyn, Farah Louis ended the celebration.