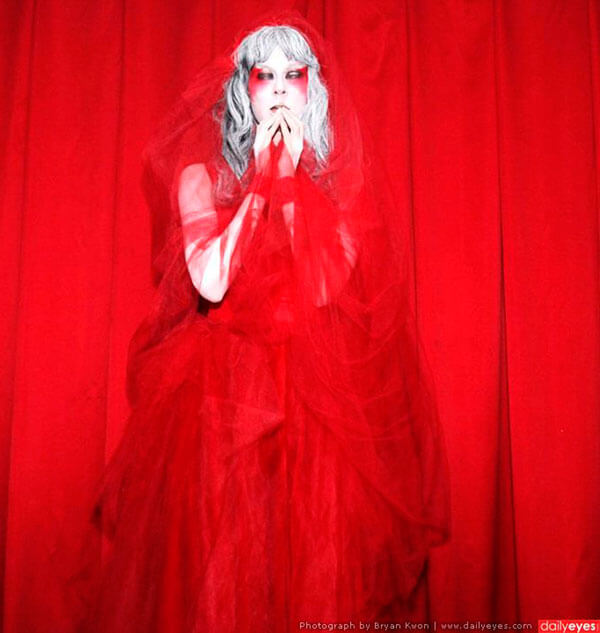 Celebrate Halloween week with the haunting art form of Butoh and come dressed in your own costume to any performance. Tickets are $20 General Admission and $18 for students and seniors. Please visit www.brownpapertickets.com/event/2582224. Run-time is 60 minutes.

The word “Eclipse” is derived from the ancient Greek noun (ékleipsis), meaning “abandonment,” “downfall,” or “the darkening of a heavenly body” which in turn stems from the verb π (ekleíp) which means “to abandon,” “to darken,” or “to cease to exist.” Butoh is likewise the “Dance of Darkness” where performers first appear human, then as ghosts.

Butoh Beethoven: Eclipse (Admiring Tatsumi Hijikata), is a solo piece that illuminates the darkness of Butoh with the addition of cutting edge lighting technologies such as the futuristic creations of European designer Tilen Sepi and fiber optic costume by the French company LumiGram. After touring this show for the past two years and receiving four stars at the Edinburgh Fringe Festival and critical acclaim in the United States, Vangeline shines a new light on Butoh and will transport audiences.

“Butoh Beethoven: solo done with integrity and bends time as butoh ‘should.’”

“A mesmerizing and exhilarating jewel… Vangeline’s exquisite control allows change where there seems no movement… a resplendent piece of performance theatre well worth seeking out: a true tour de force, literally a feat of strength, within and without.”

“…Using subtle and raw choreography, brilliant accompaniment and the power of her presence, Vangeline succeeds in bringing an essence of these iconic individuals to life on stage. The show enthralls from start to finish. Vangeline’s performance is deeply engrossing.”