The Grenada Independence Anniversary Committee of New York on Saturday night honored five outstanding individuals and a community group during the 40th anniversary celebration of the Spice Isle’s independence at Grand Prospect Hall in Brooklyn.

Born and raised in St. George’s, Grenada’s capital, Belfon has always been committed to improving conditions around her, according to her biography.

Belfon received her undergraduate education at New York University (NYU), majoring in biology and minoring in mathematics and Africana Studies.

In December last year, she completed her master’s degree in public health, from SUNY Downstate Medical Center, with a focus in epidemiology and biostatistics.

At NYU, she received numerous accolades, including a Presidential Service Award from NYU’s President John Sexton and the Woman of the Year Award for her influential role in creating community on campus.

In 2012, Belfon won the Miss Grenada/USA pageant. She executed two major projects in Grenada while holding the title – a road safety initiative and Healthy Grenadians Campaign, a competition among 11 secondary schools on the island.

Belfon is the current president of the Grenadian American Young Women’s Association, a pioneer group of young women whose goal is to promote the advancement of youth in the Grenadian community.

He worked at Medgar Evers College from its opening to his final day, holding several senior positions in the Security Department and Building and Grounds Department.

As president of the Schenectady Avenue Block Association, Boyke worked tirelessly in the pursuit of children’s education and their personal growth and development.

Borroughs owns the Brooklyn-based Compass Shipping Company, which initially started in his backyard.

With the slogan, “The compass that takes you in every direction,” Compass Shipping has also contributed to national development.

It has directly assisted with the shipping of school and medical supplies, and helped charitable organizations and government agencies.

Borroughs is considered the “go-to man” when shipping medical supplies to the government of Grenada.

The positive impact to his service is not only felt directly in Brooklyn but directly in Grenada, where Compass is not just recognized as a shipper but also as a top quality housing agent.

Borroughs has provided affordable housing for students at his Compass Apartments on the True Blue main road in Grenada.

Pysadee is a broadcaster for over three decades. He was a popular voice on radio in Grenada in the 1980s, championing the cause of airing local artistes’ music.

In 1980, when the quality of Grenada’s calypso began taking an upward trend, Pysadee was one of the on-air announcers who adopted the “total local” playlist and earned the endorsement of the listening public.

Pysadee, an ardent lover of sport, was a commentator of almost every sporting discipline in Grenada.

On his birthday, April 7, 1983, when the first international cricket match was played in Grenada at the then Queen’s Park, between the West Indies and India, Pysadee was the only local voice on the international commentary team covering the match.

After migrating to the United States in 1987, it was not long before Pysadee began hosting the popular television show, “CultureShare”, produced by Gentle Ben TV. The show, which ran from 1991 to 1996, highlighted live calypso performances and carnival celebrations in the Caribbean, North America and London.

From 1996 to present, Pysadee has been hosting the live radio show, “New York Connection” on Saturday mornings on GBN’s Klassic radio and “SpiceislanderRadio” on the Internet. On the show, he speaks to the movers and shakers in the Grenadian community in New York and other parts of North America.

Pysadee unselfishly consents to be the Master of Ceremony – as was the case at this year’s gala Independence Ball – as of many Grenadian community functions. He sees this as one way in giving back to the community, volunteering his skills.

He’s also an assistant vice president of JPMorgan Chase, where he has been employed for the past 23 years.

“I’m always humbled when thought of someone deserving of an award,” Pysade told Caribbean Life. “To be given one at the 40th anniversary of our independence is special. I will cherish this.”

The group said it was formed to, among other things, bring together all functioning and interested groups, individuals and businesses operating within the tri-state area; to aid in the coordination and scheduling of activities of various member groups; to develop a springboard of friendship; and to foster better relationships and togetherness for all members of the organizations.

No biography was available for Rev. Ray. 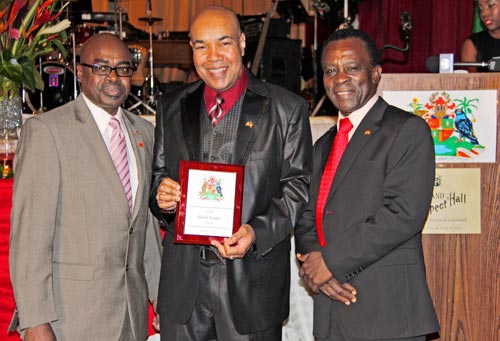